Check Cashing Rates for Each State in the US

In this post, we outline how much it costs to cash a paper check in each state in the United States.

States set price ceilings; they do not dictate the actual price that a store can charge. As a result, prices may clear below the state-regulated maximum. Nonetheless, prices may clear at the maximum, particularly in states with lower ceilings. In my home state, where the maximum rate for an electronically-printed payroll check, most stores charge the maximum price.

Do check cashers charge the maximum? A quick survey of the pricing schedules from top-of-page Google search queries suggests that they do not.

• Wisconsin check cashing service PL$ uses a uniform 1 percent of the face value plus $1 to charge payroll checks, government-issued checks, and money orders of up to $1,000.

• In Minnesota, Your Exchange charge ten percent for personal checks, 3 percent for payroll and government checks of more than $1,000, and 5 percent for money orders.

Avoid the Check Casher, Deposit your Check with Your Phone 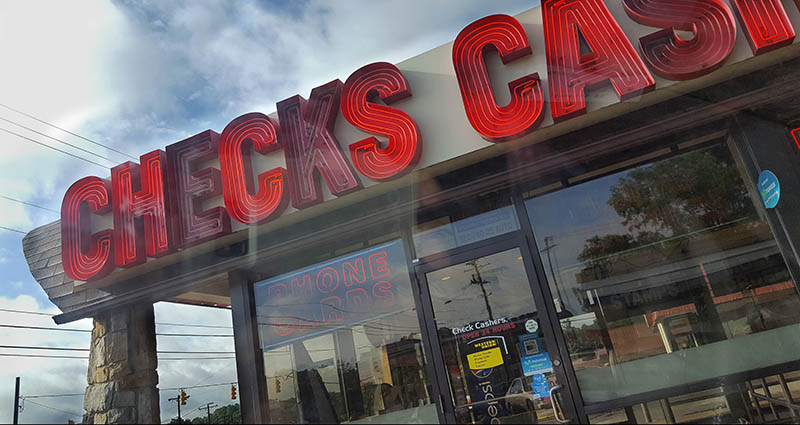 Image of a check cashing store

Arizona and Ohio have set a maximum interest rate for government-issued checks, but not for personal and payroll checks. In both, stores can charge up to 3 percent for government checks.

Rather than not set a maximum rate, Louisiana has chosen to put a cap at 10 percent for the cashing of both personal and payroll checks. It is hard to imagine that prices clear this high, but it would be remarkable if they did. The state sets a 2 percent cap (or five dollars, whichever is greater) for government-issued checks. As of November 2019, only twenty-six companies have licenses to cash checks in Louisiana at 395 locations.

The Mountaineer State limits check cashing for any type of instrument at 1 percent. For checks with a face value of less than $100, stores can charge one dollar.

If you have ever spent any time in Chicago, you might have noticed its unusual preponderance of currency exchanges. These stores do exchange currency, but that is only the beginning. They vend a variety of useful instruments such as subway passes or postage stamps. You can pay your utility bills. You can send money to a foreign country. Currency exchanges also cash checks. A street-level analysis would infer that it is commonplace among Chicagoans to cash a check, which is perhaps a reflection of how well Chicago’s financial institutions have met the banking needs of its citizens.

In 2018, Illinois changed how it regulates check cashing prices. It created a system with fifteen different categories, making rates sensitive to three different tiers of face values and five different types of checks. Rates range from as low as 1.5 percent for public assistance checks of less than $100 to 3.5 percent for printed and personal checks of more than 3.5 percent. The rule elevated the maximum rate for checks with a value of less than $100 or more than $1,250 while increasing the maximum rates for checks with values in between those rates (except public assistance checks). There is little rhyme or reason to the system.

Maryland and DC (but not Virginia)

The beltway states present an interesting contrast. Whereas check cashers in Virginia can charge any price they would like, stores in DC and Maryland must comply with lower-than-average rate caps. In both locales, the maximum cost for a payroll or government-issued check is 4 percent and 2 percent, respectively. Both allow stores to charge up to 10 percent to cash a personal check. As of 2016, there were 421 licensed check cashers in Maryland.

State laws in Connecticut, New York, Delaware, and New Jersey have set some of the lowest rates in the nation. In each jurisdiction, check cashers can charge no more than two percent of the face value of a personal check. The same caps apply to payroll checks in Connecticut and Delaware. In New York, the rate is 5/100ths of a percent lower, and in New Jersey the maximum is 21/100ths of one percent higher.

Q: Why are the rates different for different kinds of checks?

A: Risk. Check cashers take less risk when they cash government checks and checks printed electronically with a known business.

Q: How much does Walmart charge to cash a check?

Q: What identification is needed to cash a check?

A: A US driver’s license, a state-issued ID, a US Military ID, a US passport, a Mexican Matricula Consular ID, a tribal ID, or a permanent resident card.