Mobile payment apps have now been widely available for three years, but not enough people use them.

I am a regular user of Samsung Pay. I’m always surprised when a retail clerk, upon seeing that I’m taking out my Galaxy at the point-of-sale, tells me that “phone payments don’t work here.” Of course, since it happens to me about twice a week, entering a state of surprise might not be the right reaction that I should have. Instead, perhaps my response should range from befuddlement to curiosity.

You should be using a mobile payment app for two reasons: one, it’s safer. Two, because the mobile payment providers want to seize market share, you’ll get lots of free perks.

For example, I have one card that ends in 0401. But when I use Samsung Pay, my receipt says that I’ve just used a card ending with the numbers 3212. Voila! If a vendor without scruples or a talented cyber criminal wanted my number, they would be foiled because that number only works when it been sent by Magnetic Secure Transmission (or “MST”) and Near Field Communication (“NFC”) from my phone. True, a traditional pickpocket could steal both my phone and my wallet, but even then, the person would need to know both the PIN to unlock my phone and the PIN to open up my Samsung Pay.

Are you beginning to understand why a mobile payment is so much safer than a traditional card payment? It's common sense. Except for the times when I’m returning something for a refund, I can’t remember the last time a clerk asked to see my ID to verify my identity. I’d go one step further to say that the security of signature transactions is stepping backward. How often does someone attempt to reproduce their signature when they pay on a tablet accurately?

One more thing that should be mentioned about MST and NFC: Because Samsung Pay uses both of those technologies, it works with almost all of the newer point-of-sale terminals. Ubiquity is a critical distinction. I recently saw an article that reported that whereas Apple Pay was accepted at approximately 4 million terminals, Android Pay and Samsung Pay worked at ten million and thirty million terminals, respectively. In my experience, that makes a big difference when interacting with the “we don’t use that” retail clerk. While I can look at a terminal and know if it takes Samsung Pay, users of Apple Pay don’t have the same benefit. I can attest to the fact that it takes some confidence to refute a got-it-all-wrong clerk if there are people in line behind you in the check out lane. 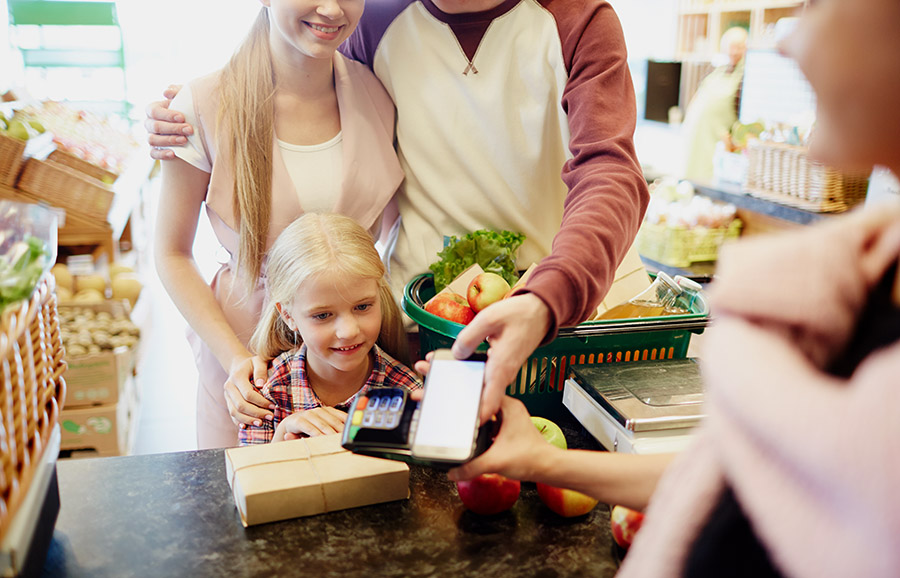 mobile payment app at the point-of-sale

Android Pay, Google Wallet, Samsung Pay, and Apple Pay want your business. Each hopes to emerge as a winner in mobile payments, as they will gain competitive advantages if they can secure a significant share of the overall phone payments marketplace. Venmo recently added a point-of-sale functionality to its service, and many of the banks have introduced their in-house mobile payments service. WalMart recently added its mobile payment app.

All of this underscores how we are shopping in an unusual time. It evokes something akin to a time when there were four or five different word processing products (i.e., Apple Pages, WordStar, WordPerfect, Microsoft Word, Microsoft Works). The end game for each is the same. The winner will be the one with the most extensive user network.

That need to gain users translates into an opportunity for consumers to get free stuff. Free stuff! That’s right!

Oh, hold on: I just bought a Lowe’s gift card.

I would benefit from the same opportunities if I used ApplePay. In fact, in the race to attract customers for their mobile payments products, almost everyone has something free to give to consumers.

If you want free stuff just for spending money, then you need to start using a mobile payment service.

Apple rolled out Apple Pay in 2014, a year before the arrival of Samsung Pay and Android Pay. Several million people signed up for the service on the day it launched. As a result, ApplePay has established a big lead in overall adoption. But Samsung Pay and Walmart pay are both catching up. According to Crone Consulting, WalMart Pay now works in almost five thousand WalMart stores.  The firm says that active users (consumers who used a payment at least twice in the previous month) of Walmart Pay may soon surpass those with Apple Pay.

By the way, Walmart Pay doesn't use NFC or MST. Instead, it relies on QR codes to transmit payment details.

It isn’t just Walmart Pay that is encroaching upon ApplePay. Samsung Pay is now growing faster than ApplePay. By my way of thinking, Samsung’s MST technology is the difference-maker. Right now, a shopper can use Samsung Pay in any location that accepts a magnetic stripe card. You can use ApplePay at any store that has purchased a point-of-sale system with ApplePay.

Apple has stumbled here, in my opinion. As usual, they have created a system that only works with other Apple products. But becoming a consumer’s default payment platform isn’t the same as giving people the only one choice of headphone. When you can’t rely on Apple Pay to work every time, you look for a different solution.

Conclusion: If you are going to pay…

I’ve found that it’s best to smooth things over with the clerk who just told me I couldn’t use my Samsung Pay. After all, it’s their house. I only shop there. So I adopt a tone of inclusiveness – a natural thing for any Southerner to do.