NetSpend's Ace Flare Account Has Overdraft Fees; Is This an Evasion?

Through a regulatory technicality, NetSpend found a way to work around the CFPB’s restrictions on overdraft fees on prepaid debit cards. Now, NetSpend is mailing flyers announcing a new incentive that will probably drive more people back to overdraft fees. The new NetSpend promotion promises to reward people with a $100 credit if they establish direct deposit to an Ace Flare account, and therein, they are incenting people to take the steps necessary to turn on overdraft on their accounts.

Until April 1st, 2019, NetSpend offered an optional overdraft service on its prepaid accounts. The company removed that functionality on all existing accounts then, driven by new rules from the Consumer Financial Protection Bureau governing all prepaid debit card accounts. Notably, while the CFPB’s new rule did not prohibit overdraft, it did establish a set of procedural requirements that added costs and delayed signup. NetSpend, in its filings to investors, attributed its decision to drop the service because of the new regulation.

At the time, I predicted that NetSpend would find a way around the rules. NetSpend is now claiming that its Flare account is a quote unquote "bank account."

Only a few consumers will appreciate the difference between a Flare account and a prepaid debit card.

With this regulatory experiment, NetSpend has pushed against – you might even say evaded – the CFPB’s intentions. NetSpend is marketing Flare through Ace Cash Express stores – the exact market that has traditionally utilized their prepaid debit card product – with a difference that is not a distinction to its cardholders.

It remains to be seen if this evasion will survive.

NetSpend probably hungered for a way to restore overdraft revenues to its accounts. In a recent filing from its parent company (TSYS), the company said second-quarter service fee revenues fell by $2.4 million year-over-year. To explain that change to investors, the company offered this analysis:

Service fee revenue decreased $7.8 million and $2.4 million, or 5.5%, and 0.8% for the three months and six months ended June 30, 2019, respectively, compared to the same periods in 2018. The decrease in service fee revenue for the three and six months ended June 30, 2019, was driven by the removal of certain service fees on prepaid products effective April 1, 2019, upon the effective date of the Consumer Financial Protection Bureau’s (“CFPB”) 2016 prepaid rule.

MetaBank, once the issuer of the i-Advance line of credit, issues the Flare account.

By my take, this infers that NetSpend had been receiving almost $10 million per year in service fee revenues from its overdraft program. 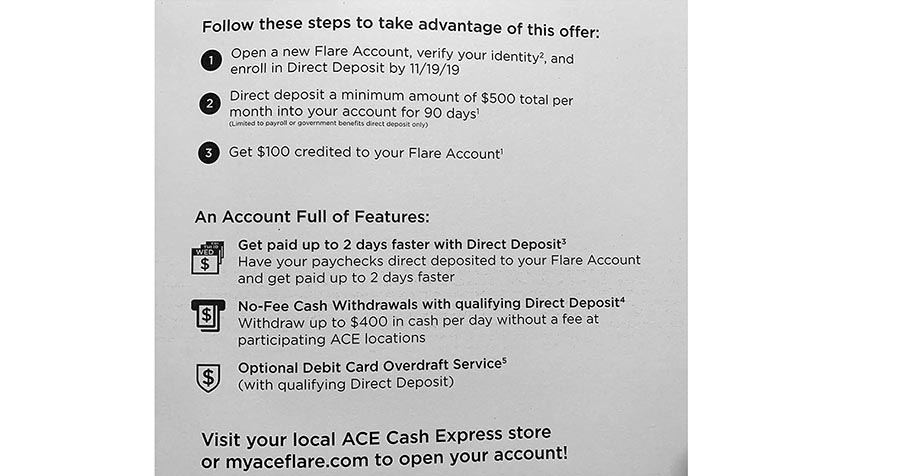 To be honest, the stakes surrounding this evasion are much bigger than just this one account.

If companies can claim that merely by changing how an account is defined, then they can bypass the CFPB's prepaid card rule.

Terms and Conditions of the Optional Debit Card Overdraft Service

Account-holders must establish a recurring direct deposit to receive the bonus and to facilitate overdraft services. The account should receive at least $500 in direct deposits each month for 90 days.

The source of direct deposits must be either a government benefit or from earnings. An account holder could not transfer funds by ACH from one account in his or her name into the Flare account.

Flare’s promotional material promises to reward consumers with a $100 credit if they establish a qualifying direct deposit. Other conditions also apply.

Structure of the Overdraft Service

• If a transaction overdraws an account by more than $10, then the customer will be charged a fee of $20 per occurrence, up to five times in a calendar month.

• Account-holders have twenty-four hours from the time of the first overage to bring the account back in good standing. If they do, then the overdraft fees are waived.

• Overdrafts can be triggered by PIN debit, signature debit, and ATM withdrawals.

Consumers can opt-out at any time, but doing so will not absolve them from the responsibility of satisfying any outstanding overages.

NetSpend does not offer consumers access to a fee-free ATM network. However, Flare consumers can visit certain ACE Cash Express locations and withdraw up to $400 per day.

It has plenty of information on overdraft fees:

Research on how banks market overdraft

Bank-by-bank reports on how much overdraft revenue they earn.

FAQs to answer your questions about overdraft.

A choice of bank accounts without overdraft fees.

How Will NetSpend Respond to the New CFPB Prepaid Rule? November 2019

Comparison of Fees for NetSpend, Green Dot, and Varo Accounts