Who are the Precariat?

Last spring, the Federal Reserve captured the attention of many when it published new findings from a report on the finances of US consumers.

The headliner from the “The Report on the Economic Well Being of Households” revealed a hard truth: even middle-class workers were struggling to save money.

"Even with the improvement in financial outlook,” said Federal Reserve Board Governor Lael Brainard, “40 percent still say they cannot cover a $400 emergency expense or would do so by borrowing or selling something.”

Lost in the roar was the added detail that this was an improvement from 2013 when the Fed estimated that half of all households were living so close to the edge of financial hardship.

While it isn’t clear why the report gained the attention of so many people when earlier findings were direr and less well heard, the reason for the attention it garnered is readily understood. It changed how we think of the finances of the middle class.

We have a new class of workers, united not by similar incomes, but by their common position on the edge of insolvency. They are the “precariat.”

The precariat lives without economic security and as a result, its members suffer from psychological distress.

The Fed study changed the baseline because for better or worse, policymakers and the general public alike take for granted that even though everyone may not be in the habit of building assets, there are reasons to explain it that does not place the blame on systemic weaknesses within our economy.

The thinking says that for many, the problem is only temporary. Young people, often saddled with student loan debt, may not have assets today but certainly will in the future. New arrivals in the country may be impoverished at the moment, but they are on an upward trajectory. Yes, minimum wage workers do not make enough to get by, but aren’t a portion of those individuals merely students flipping burgers while they pursue an education? Their explanation does not hold up to scrutiny.

Likewise, those who choose to blame consumers for their poverty are not always right. The thinking goes something like this: poor people create their problems because they make foolish decisions, putting off plans to save in favor of immediate gratification.

However, I don’t think it is fair to explain away asset poverty as temporary or to blame everyone for being irresponsible. Many people work hard, try to save, but work in jobs that don’t pay enough to make ends meet. 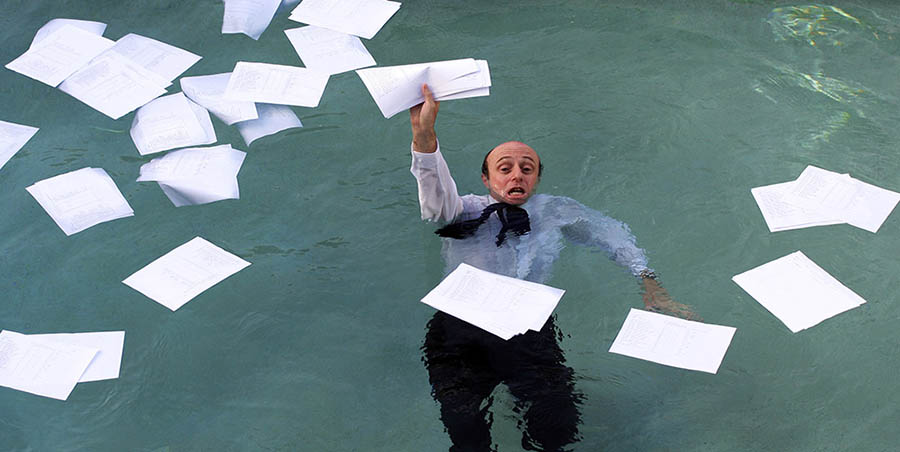 Person under Financial Stress Under Water

The Fed study shocked people because it revealed asset poverty to be more widespread than we had previously imagined.

Now the public could see that the precariat included not just the very poor but also a good share of the middle class. People with incomes above $75,000 were still not putting away any emergency savings. The assets that did have, such as equity in a home or a balance in a retirement account, were not liquid.

While being “house poor” is different from being destitute, people in both situations share a common problem with financial stress.

In their 2014 book “Scarcity: Why Having Too Little Means So Much,” Eldar Shafir and Sendhil Mullainathan wrote about what it’s like living under constant financial stress. Without anxiety, people benefit from a “focus dividend;” those who must triage in the face of poverty suffer a “bandwidth tax” that undermines their power to make reasonable decisions. Stress becomes determinant, outstripping the gains associated with traditional measures of reasoning power like IQ:

“We went to a mall in New Jersey where we asked people to complete tests measuring cognitive control and fluid intelligence, a component of IQ. We had them do these things while they were contemplating a financial scenario — something that's manageable, requiring $150 to fix a car that broke down, or more demanding, requiring $1,500 in car-related expenses.

We divided the participants by household income and found that the rich people in the mall did equally well on the cognitive tests, whether they were thinking of the challenging or the less challenging scenario related to the car. The poorer people in the mall were equally capable cognitively and did just as well on fluid intelligence as the rich when they were thinking about the manageable scenario. However, once they contemplated the more challenging scenario, their scores went way down. Simply being preoccupied with this demanding financial challenge makes them perform worse.”

Sharif and Mullainathan surveyed groups as different as Princeton undergraduates and rural farmers and came to the same conclusion.  Regardless of native intelligence, financial stress undermines financial decision-making.

The Fed report makes much sense once you think about it. While the Dow has soared to 25,000, the minimum wage is unchanged since 2009. In most job-rich places, finding an affordable home in a good school district is nearly impossible.  Drawing from my observations of the changes that have occurred in my community, I see how job growth is inversely correlated with the cost of housing. When unemployment was at 10 percent in Durham, homes near to downtown sold for $70 per square foot. Now that everyone wants to work here, the same homes in the same neighborhoods command $300 per square foot.

Consider the findings from time-series employment and wage data kept by the St. Louis Federal Reserve:

• Average earnings have increased by 19.8 percent.

• The cost of employment has increased by 22.4 percent.

1) The economy for health care is doing just fine: Businesses have seen their payroll expenses increase in the last decade, even after accounting for the cost of inflation, but those forces haven’t impacted the size of paychecks. Health care has captured almost all of those gains.

2) The difference in average earnings and median earnings points to the increasing income inequality in our society.