Why Digital Banking Emerges on the Top

Branchless banking will continue to take customers away from banks that hold onto the vision of retail banking as a service delivered through physical branches.

I see two drivers behind this fundamental change in how customers manage their money.

On the demand side, fewer people want to rely on one financial institution for all of their needs. We have become a country of comparison shoppers who expect to be able to select the best fit for their needs in minutes.

On the supply side, banks see less and less benefit to investing in their branches. The connection between providing branches to customers and capturing their high-value consumption is weakening.

Consumers Are Not Very Loyal

The financial services marketplace has become one more place where the internet’s ability to lower search costs has led to destabilization and fragmentation. It used to be that finding the best rate on a mortgage took lots of time. A person would have to visit branches, provide enough information to establish an estimate of their creditworthiness, and then wait for a teller to call back with a price quote. Now, a prospective borrower can see likely costs for thirty lenders in minutes via a comparison website. I am a case in point. The retail bank where I keep my primary checking account wanted to charge more for closing costs than did a nearby financial institution. I took my business across the street.

The future will be a situation where people have relationships with many FIs: one for a home mortgage, one or several for transacting, another for business lending, another for high-yield savings. The benefit that banks foresaw with the repudiation of Glass-Steagall, may not matter: people are already separating their investing from retail banking.

Should we expect consumers to feel any obligation to a financial institution? Many people have lost their sense of loyalty, not so much because of digital alternatives, but simply because banks have not demonstrated themselves to be worthy of trust.

To underscore this through my own behavior, I admit that my wallet contains seven debit cards issued by five different banks. I use a separate institution for my money market account, my 401 (k), my personal IRA, my 529 account, my home insurance, my life insurance, and my credit cards.

Of course, the fractured state of the modern consumer’s wallet is not itself the causal force that moves people to digital banking. Nonetheless, it sets up the landscape of an era where people curate their financial lives. We have more choices. To the extent that more choice leads to people opting to use more channels, then fracturing does become at least in part the impetus for more people to go digital. 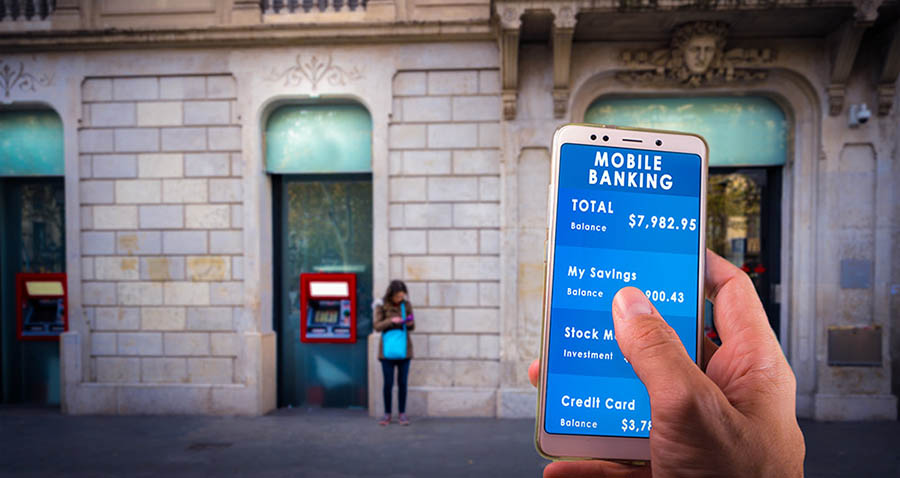 Banks Don’t See As Many Benefits of Providing Branches

When consumers signal their willingness to be choosy, banks take notice.

For more than a century, branching was the theory that said that a physical presence in a community led to a competitive advantage in the race to capture market share. Beginning in the 1980s, the ATM network was folded into that approach.

Fast forward to today. Many people are divorcing themselves from their branches. On the one hand, it’s an omen that branch users are most often older. On the other hand, branch users are often the best accounts.

Unfortunately, the value proposition of an investment in a branch doesn’t pay off as well as it used to. The branch office may bring in new business, but not enough to overcome the costs, fundamentally because branch-driven opportunities for cross-subsidization are limited. Reports say that most branches produce only one or two new mortgage applications per month. Nowadays, most people go online to comparison shop for the best rate. Five of the nation’s ten largest mortgage originators are non-bank mortgage finance companies. The wallet is fractured by choice, and the same is true among seekers of home loans. How common is it for a person to use a credit card from the same bank as the one where he or she holds a savings account?

Opening a branch is very expensive. A typical suburban branch costs more than $1 million to build. The American Bankers Association reports that it costs about $500 per square foot to build a branch, with land acquisition costs adding an average of $930,000 to overall construction expenses.

Then there are the ongoing costs of staffing. A quiet branch might have three tellers and a branch manager. A busy branch in a mid-sized town could easily have six tellers and several “bankers.”

Banks seem to understand the perspective. In 2018, the national inventory of bank branches declined by 1,947 locations. Wells Fargo reduced its overall network by 293 branches. Similarly, Capital One and BB&T trimmed down by fifteen and eight percent, respectively. Even JP Morgan Chase, having said that it would expand branches in the future, shrunk by 100 net branches.

Banks have to pass these costs along to their customers. Do you remember when Jamie Dimon said it costs his company about $300 per year to offer a checking account? The costs add up: first, a bank bears the cost of acquiring a customer, a price that can easily average out above $200. There, once the account is established, banks must pay to manage compliance, provide statements, maintain customer service, and invest in their technology. On top of that, they have to build branches and ATM networks.

The Move to Digital Won’t Cease Because Digital Works

Partially this is because of cost; the expenses of a branch are foregone in place of marketing expenses. While customer acquisition can still be very high – witness the recent spate of sign-on bonuses for new accounts – they are still scalable.

However, it’s also because the digital banking experience works for consumers. Using an app is more convenient than the Luddites want to admit. You can check your balance whenever and wherever you are. You can manage funds, set up a payment, and review your budget all with a few thumb swipes. Digital banking makes it easy for people to become responsible for their finances.

It’s also inherently safer. A person must satisfy authentication at least twice before he or she can take action. Moreover, apps can use biometrics, something that confers much more security than a simple password.

Going back to the cost, but the evidence in the marketplace screams and shouts that consumers receive benefits when products are delivered digitally. The savings account yields offered by online banks dwarf the ones available at the mainline banks. The yields on WiseWage’s accounts are both north of two percent this week. Compare that to the minuscule returns given to people who bank at Wells Fargo – currently 1/100ths of one percent.

Even as I mention their limitations, I still believe there will be a place for bank branches for some time, and indeed, some consumers will likely rely on them regardless of how many services can become digitized. Many people never use a branch, others do only on a special occasion, but a good portion visits one more than twenty times per year. One channel doesn’t have to destroy the other to become sustainable. I think we are heading for a future where both exist – the critical question is not if one will disappear but rather which one becomes dominant. I am betting on digital.

Adam Rust has worked to defend consumers against harmful financial practices since 2005. He has written extensively about overdraft fees, payday lending, student loans, prepaid debit cards, and subprime mortgage lending. He serves on the Board of the US Faster Payments Council. He is Director of Research at Reinvestment Partners in Durham, North Carolina. He is the author of BankTalk. See more on his LinkedIn profile.